The pile box hive has a very simple structure. It does not contain any removable frames.

Structure of the pile box hive

The structure is simply a box with a small entrance. Like log hives, bees are allowed to build comb as they want.

This video is two weeks old colony of Japanese honeybees.

This hive has 2 to 6 boxes. 2 boxes are enough for a bait hive of pile box hive. Additional boxes need to be added to the bottom as the colony grows. 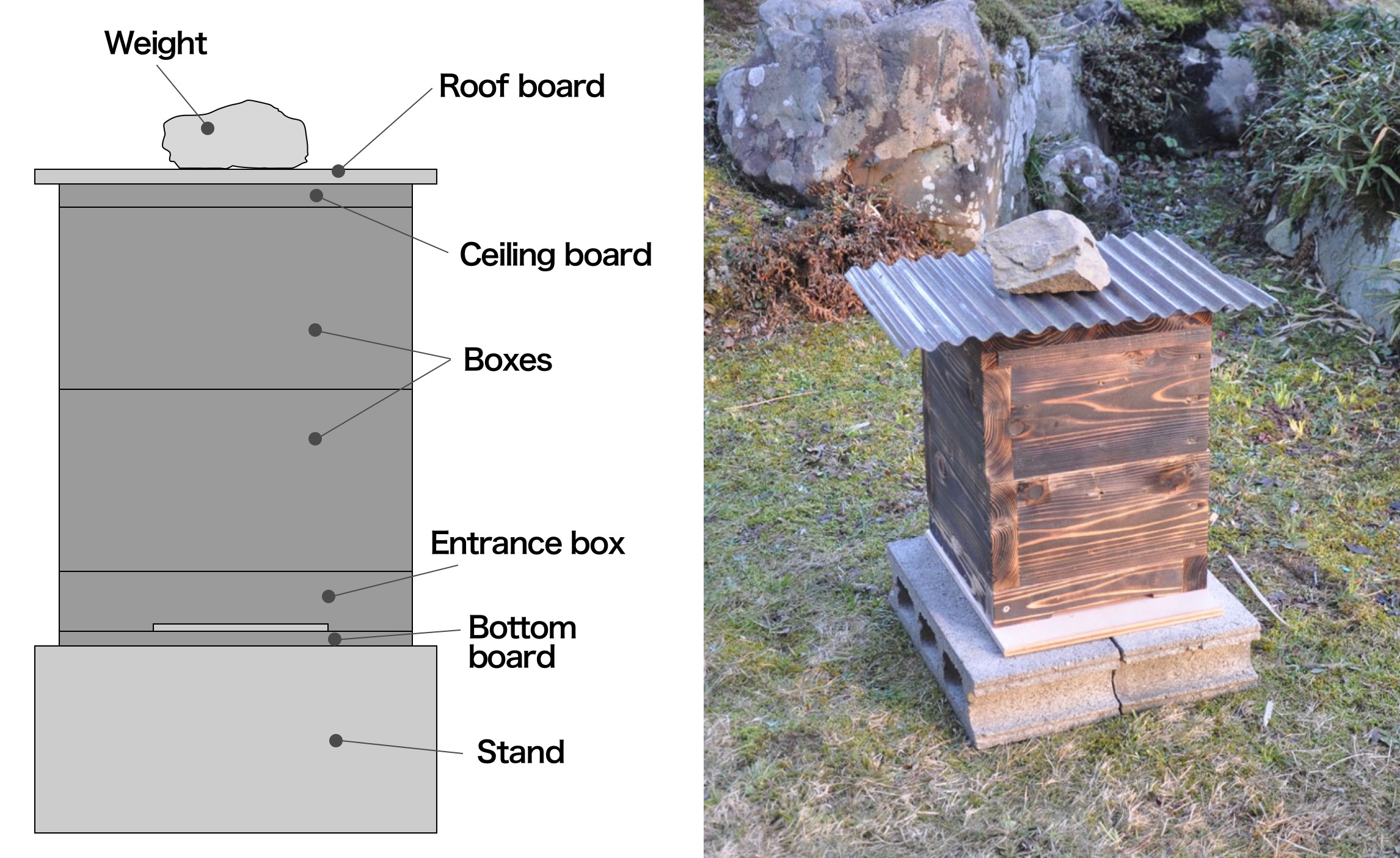 Although a pile box hive does not have any frames, extracting honey is an improvement compared to a log hive.

A pile box hive allows us to remove only the top box after it is full of honey. The colony does not need to be destroyed to take honey.

Although a pile box hive does not have any frames, the method for extracting honey is an improvement.

Box dimention and how to make it

The Box is very simple structure. 2 wires are attached to prevent combs from falling.

Structure of the top box

The top box has a duckboard and a lid. Following image is a cross-section of the top box. A duckboard is attached to make taking honey easier. 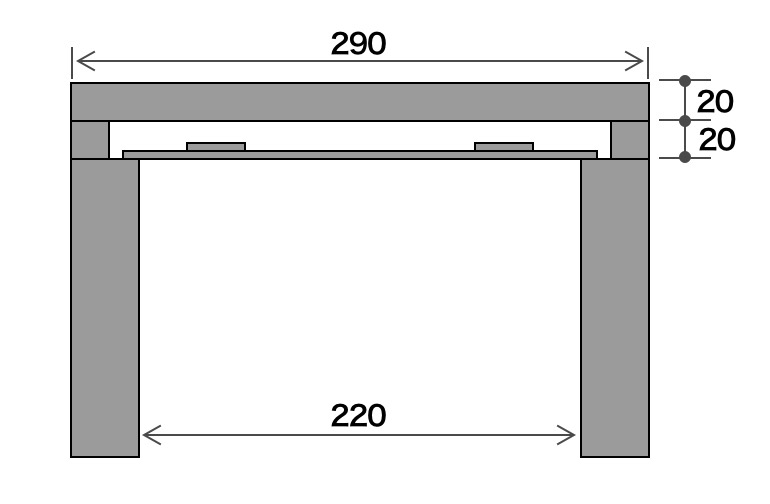 The dimension of the lid. 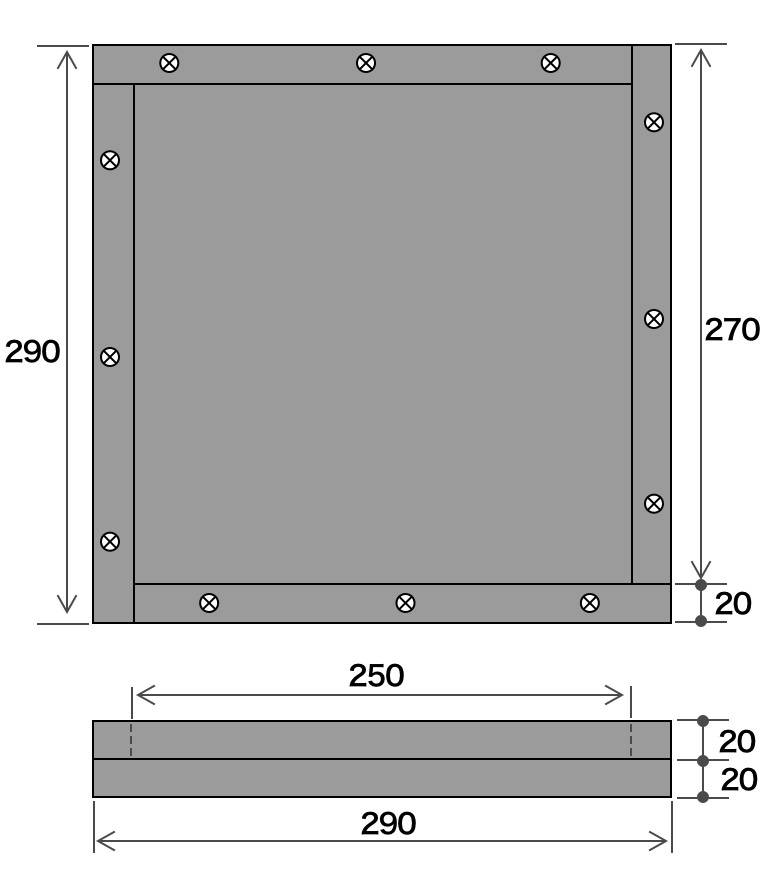 The dimension of the duckboard. 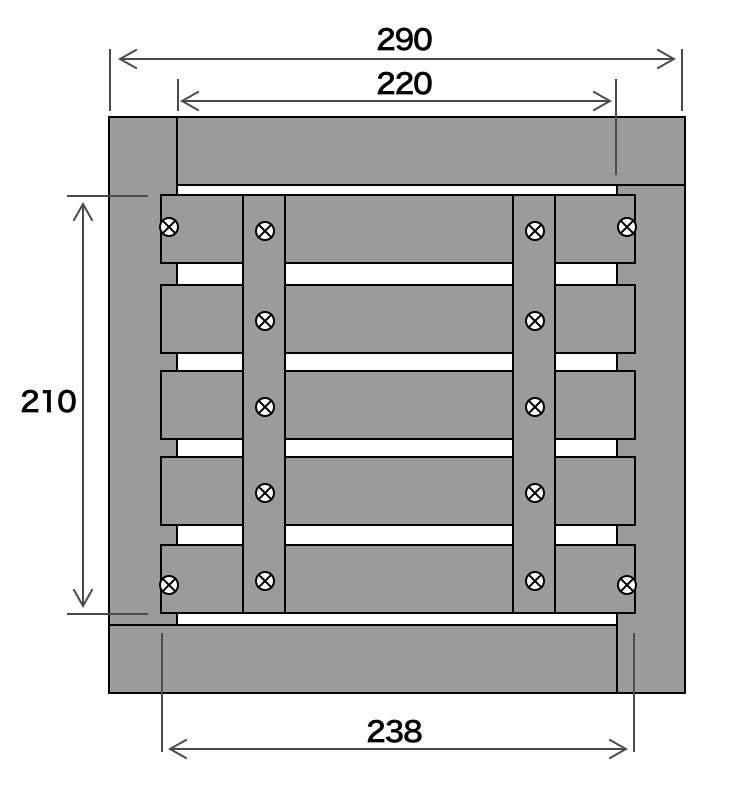 Structure of the entrance

The entrance frame is similar to the box. It is put on a board. 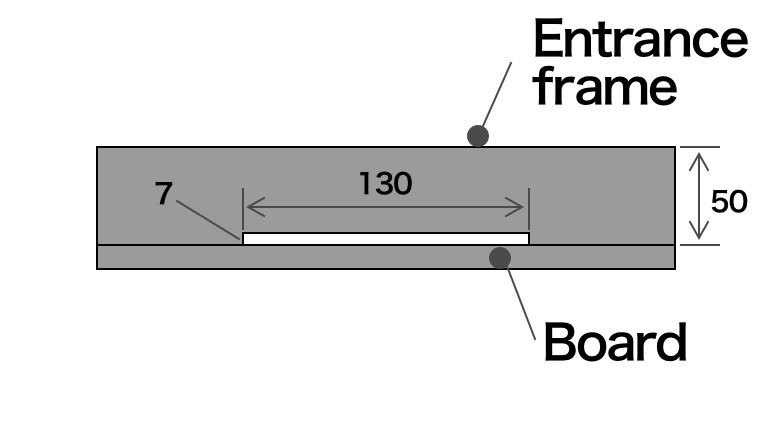 The entrance is important to protect bees from giant hornets. They destroy bee's colony completely. The honey and bee larvae are also taken to feed the hornet larvae.

The entrance should be small enough to prevent giant hornets from invading. About hornets, please read this article.

Advantages of the pile box hive

There are many advantages, especially for hobbyists.

You can leave beehives for months.

Disadvantages of the pile box hive

There are some limitations to the pile box hive that restrict how you can manage a colony.

The basic idea is the same as the log hive. This hive provides an enclosed space for wild bees.

Honey extraction is much easier than a log hive, but some limitations are almost same.

You cannot do the following things:

There is also a little less honey production because honeycombs are also taken to take honey.

Comparison to the Langstroth hive

In Japan, the Langstroth hive is used widely to keep Western bees, but it is not often used to keep Japanese bees.

It is often said that the productivity of a Langstroth hive is higher. I am not sure it is true when keeping Japanese bees.

A pile box hive can be better in production per hour because less time and effort are needed.

All I have to do when I use the Pile box hive is:

At a minimum, I need only 5 hours to get 5kg of honey.

On the other hand, with a Langstroth beehive, it is expensive and takes longer if you make it yourself.

I need to inspect the colony almost every week and it takes a lot of time to go to places where hives are located.

How much more honey could I potentially get? As mentioned, I can get somewhere between 5kg - 10kg per hive on average when I use a pile box hive.

The increase in honey production may not be worth the time and effort required.

The log hive itself does not have an advantage over a pile box hive, but the method of honey extraction is disadvantageous. (It is sometimes said Japanese honeybees prefer the log hive because it is similar to a hollow tree.)

However, honey extraction is different.

The biggest problem with the log hive is that you need to destroy the colony and force out all bees in order to extract honey.

The bees lose their larvae and honey in the fall, which means they cannot survive over the winter.

In that case, you need to capture swarms every spring, so it is not easy to increase colonies.

Some beekeepers have some methods to avoid destroying the colony, but they are not easy to carry out and require more time and effort.

It is better to use a pile box hive if you do not want to destroy the colony.

It depends on your preference and why you are keeping bees. A pile box hive is suitable for hobbyist because:

Hobbyist does not need tons of honey production. Around 10kg is enough in many cases. You can get enough honey for your family and friends without it taking a lot of time and money.

You still have time to enjoy other hobbies like a kitchen garden even if you are a full-time worker.

A pile box hive is suitable for a side job as well.

You can find many places to keep your hive if you live in a rural area. It's ok if it's not located near your home since you do not have to manage your hives often.

The honey produced by Japanese bees is more expensive than that of Western bees, costing about 100 US dollars per kg.

Bees for development in Asian countries